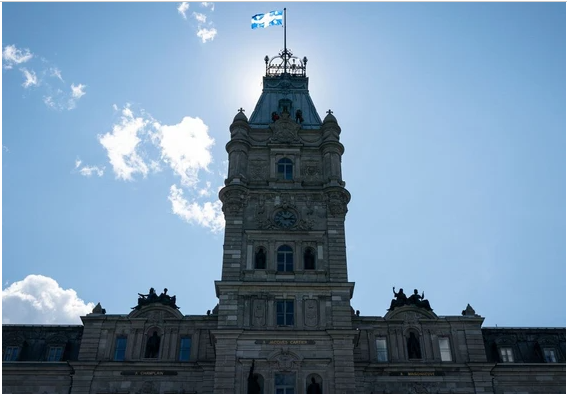 The Quebec legislature is pictured in Quebec City. Alberta and Quebec should present a united front in legal challenges to federal legislation that invades provincial jurisdiction, Michel Kelly-Gagnon writes. PHOTO BY MATHIEU BELANGER /The Canadian Pressnge, but then when isn’t that the popular excuse for all rising costs ?

One of the riskiest things you can do in Canada is provide advice to a province you’re not from. This is especially so when the provinces involved are Quebec and Alberta, so what I have to say may be seen as an exercise either of great courage, or of great folly. But I believe it is important that we continue to talk to each other across provincial borders, and learn from each other, and work together when it is in our mutual interest to do so.

In my case, I feel that I can claim special privilege in speaking to Albertans, because I have been defending Alberta’s energy industry and promoting your lower taxes and your entrepreneurial spirit and freedom-loving world views in Quebec and in the national media for more than 25 years. And that is why I am moved to share my advice, as a Quebecer, to Alberta’s new government on how they can better stand up for the rights and interests of your province.

First, it is important to understand the underlying dynamic that Alberta faces. The institutions of Confederation are set up in such a way that Ottawa will always feel entitled to try to tell the provinces how to manage their affairs. It is up to the provinces to develop strategies to counter this structural tendency so that they can leverage their own power against federal power if they so wish.

This can take conventional forms. For example, Alberta and Quebec should in my opinion present a united front in legal challenges to federal legislation that invades provincial jurisdiction. This could be a formal agreement between the provincial governments of Alberta and Quebec to simultaneously present legal challenges in their respective provinces and then join forces later on before the Supreme Court. But such efforts, while useful, should be complemented by more audacious and unconventional strategies — strategies that draw less on law and more on realpolitik.

The term “realpolitik” was coined in the 19th century by the German writer Ludwig Von Rochau, who saw that, while appeals to principle are nice, sometimes power must be countered with power. Applying realpolitik to the Canadian context, it is important to understand that there are two constitutions in Canada: the constitution that is written on paper, and the constitution that exists, and evolves, in practice.

The paper constitution says that local energy development, for example, is a matter of provincial jurisdiction. But right now, the real-world constitution says that the federal government is able to dictate or veto provincial policy. Alberta can make all the sophisticated legal arguments it wants — and sometimes it may even win, at least in its own courts — but ultimately its principled arguments are no match for the raw fact of Ottawa’s political power.

Yet it doesn’t have to be this way. Provinces have power too, and they have levers to exercise that power. To be blunt: Sometimes a provincial government ends up having the powers it dares to take, and not just the powers that are handed to it. That, at least, has been Quebec’s experience.

Exercising this sort of power blurs the lines between law and politics, but only because it recognizes that law and politics are more often than not intertwined. The courts and the tribunals that interpret the law are made up of human beings who are not immune to the influence of politics. So are the federal government and the federal public service.

Quebec has been successful at protecting its provincial jurisdiction by appealing to these extra-legal considerations. Quebec’s legal arguments are not necessarily stronger than Alberta’s, but historically it has wielded its political power more effectively. Alberta could learn from Quebec that, when it comes to dealing with Ottawa, you can’t be afraid to rough it up a little. Quebec’s former premier Robert Bourassa metaphorically called it “constitutional negotiations with a knife on the throat.” To use a hockey analogy: Sometimes, to change the momentum of the game, you have to go into the corners with your elbows up.

This strategy would be even stronger if Alberta could enlist the support of like-minded provinces that bring their own political power to the fight. That is where the idea of an Alberta-Quebec alliance comes into play. In several cases, Quebec would be happy to have a friend in the West as it fights for provincial autonomy — and Alberta would benefit from having a friend in the East who, whether you like it or not, historically tends to have an oversized influence in Ottawa.

Hard-headed politics — realpolitik — requires us to make strategic alliances when our interests align and we can be stronger together. But I also believe that, if Albertans and Quebecers work together to defend the proper constitutional division of powers, they will find that they have more in common than they think.

Michel Kelly-Gagnon is the CEO of the MEI, an independent public policy think tank with offices in Montreal and Calgary. This is an adapted, condensed version of a speech he will deliver before the Alberta Enterprise Group on Oct. 19 in Edmonton and Oct. 20 in Calgary.